As I said on Wednesday, I am so glad Karen Ehman wrote her new book Keep It Shut: What to Say, How to Say It & When to Say Nothing At All because this week, let’s just say I’ve had some issues! The winner of Keep It Shut is  Laurie Lett. Please send me your full name and address and Karen’s publisher will get it sent right out to you! 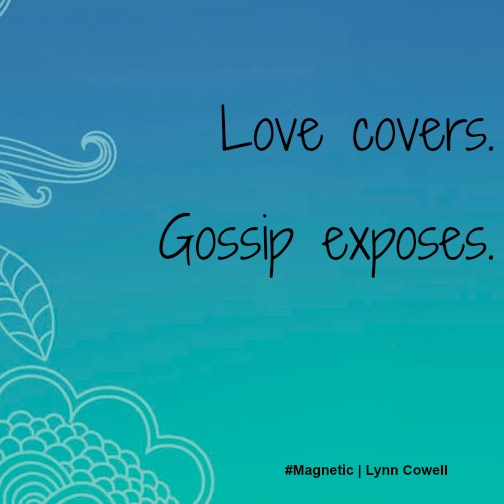 I am so glad God put stories of people in the Bible who had issues – issues similar to mine! They give me hope and help me to not feel so alone in my journey to become the woman I want to be – a woman like Jesus!

One of those stories is in the book of Genesis:

“Ham, the father of Canaan, saw his father naked and told his two brothers outside. But Shem and Japheth took a garment and laid it across their shoulders; then they walked in backward and covered their father’s naked body. Their faces were turned the other way so that they would not see their father naked.” Genesis 9: 22- 23 (NIV)

The story of these three brothers reminded me of a story of my own:

“This day is not getting off to a very good start. She’s already nasty” my friend shared. The day ahead presented some stress and it appeared one of our group was having difficulty already. When the pressure we’re under takes us under, those around us can pay the price.

Stopping for a moment, I took a minute to pray. I prayed for the woman. I prayed for our day. (It appeared we both needed it!) Heading into the meeting, I purposed to forget the comment and move forward.

When we find ourselves privy to information we didn’t ask to know about, we’re always given an opportunity.

In this story, Noah’s sons were given this opportunity. After the flood, Noah planted a vineyard. One day, enjoying the fruit of his garden, he indulged and became drunk. In his stupor, he fell asleep naked in his tent. Ham, Noah’s son, walks into his father’s tent, I’m sure very surprised at what he encountered.

Stepping outside the tent, he lets his brothers, Shem and Japheth in on his discovery. The younger two respond to their father’s embarrassing situation by putting a cloak on their shoulders. Walking backward with the cloak going before them, they covered their father.

Encountering this shady situation, the sons had options on how to respond. They took very different directions.

It wasn’t his fault that he stepped in on this very uncomfortable scene. The Bible doesn’t say he was out to find out some dirt to dishonor his dad. We can’t assume anything other than Ham was at the wrong place at the wrong time.

Looking at the other brothers, Shem and Japheth heard and covered.

These brothers also weren’t looking to be told of their father’s unwise decision.

What made the difference was how they responded.

Ham chose to expose; took the opportunity to highlight his father’s fault.

Shem and Japheth chose to cover. They took action to protect their patriarch. We don’t read any words they said. No dialog of defense. They simply chose to honor. They chose love.

God commands us to choose love as well. 1 Corinthians 13:7 tells us love always protects. Sounds warm and fuzzy, but we all know how very, very hard it can be to choose to cover someone’s failure instead of exposing them to all.

Back to my opening story: I wish I could say I really did choose not to expose the person having the bad day. I didn’t. Later in the day, I shared with my husband my encounter. The next morning, God shared with me the story of the three sons! I’ve asked for His forgiveness, asking Him to make me one who protects and not exposes.

I’m guessing you know of a person or two making poor choices as well. Easy to expose, temptation nudges us to tell another. Like the brothers, it might be a family member or it could be someone you barely know. No matter who the hurting person is, God calls us to practice protecting.

Practice taking what you know and taking this information to God. Not to a friend or our favorite social media. He calls us to love; cover the person in our prayers. Ask God, right now, to give them the wisdom they need.

Jesus, (insert name) needs your wisdom. I cover them now in my prayers, asking You to step in and help them find their way. Show what is best for them and honoring to You. In Jesus’ Name, Amen.

Lynn
Previous Post: « Praying for Your Girl Into the New Year
Next Post: Can't You Hurry Up, God? »