Today, I share a guest post from my friend, Kathi Lipp. Kathi has recently released a book that has been a blessing to me, “Praying God’s Word for Your Life” 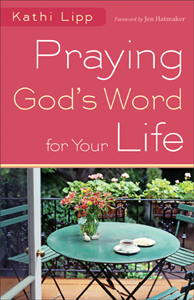 And we know that in all things God works for the good of those who love him, who have been called according to his purpose. Romans 8:28

I recently created a “Life Map”. I was instructed to pick the eight “best” events in my life. Not my kid’s events, but things that were directly about me, my plans, my goals and dreams. (If you’re a mom, you get how hard it is to think about your life not in light of your kids.)  It took me forever to come up with list. Here are some of the things that were included:

Some pretty cool stuff. Things that I had prayed for and hoped for. It was so cool to see the gifts that God has trusted me with over the years.

The next step was to list the eight biggest disappointments or heartbreaks of my life. (As you can imagine, this list was much easier to come up with.) Some of those items included:

I still feel the pain of each of those rejections in the pit of my stomach just from typing the words. I do my best not to think of those times, because when one comes up, ever single rejection comes up and joins it. Let’s just say this was not my favorite part of the exercise.

The final step of this process was to do a timeline of all those events during my lifetime, and see if there were any patterns that emerged. So first I put in all the victories (because those are the fun ones.) Then I started to plug in the disappointments. And indeed, a pattern emerged.

Each and every success was proceeded by one of those heartbreaking, devastation disappointment.

Does that make future disappointments easier? Probably not. But it does provide one beautiful thing: Hope.

And hope is a beautiful thing.

1.    Progress is usually public but the pain of disappointment is almost always private. When it seems like another person’s life is filled with rainbows and unicorns, I remember that for almost all of us, we’ve had to go through some unpleasant stuff to get to the good stuff.

2.    When you feel like something is over, it just may be the in-between. Most likely, the end, isn’t. God has a bigger plan than we can understand standing on this side of disappointment.

Stay with it Trust God, and wait for the rest of his plan.

Is there one disappointment/success that stands out in your life? We’d love to hear 🙂