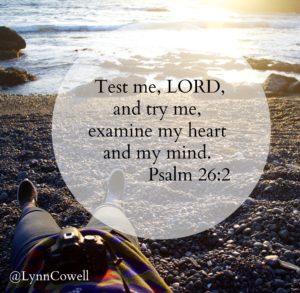 “Saul was told that David had gone to Keilah, and he said, “God has delivered him into my hands, for David has imprisoned himself by entering a town with gates and bars.” 1 Samuel 23:7 (NIV)

Stuck somewhere between numb and exhaustion, I stared out the window. Lord, how did I end up here? Please forgive me.

I had grown up hearing, “Pray for God to open a door.” So when it came to my job, I had done just that. I prayed, I believed and before I knew it, there wasn’t just one, but an entire hall of open doors. That is when I quit praying. Somewhere in my mind, I figured I would just do what I had been trained to do and walk through them.

In the middle of the success coming my way, I didn’t stop to ask with each new opportunity, “Is this You, Lord?” I already knew it was Him; right? My actions said, “I’ll take it from here.”

Shortly after being crowned king, Saul took over his life as well. In this place of no longer humbling himself to ask for God’s wisdom, Saul’s heart became hard. Though he had once experienced a change of heart and the Spirit of God moving in power in his life (1 Samuel 10:9-10), the sin of jealousy over David’s success had taken over. Blinding him from recognizing the difference between the voice of God and the voice of his jealous-driven heart, Saul began to confuse the two. So in today’s key verse of 1 Samuel 23:7, when Saul discovers the whereabouts of the hidden man David, in a delusional state, he believes God has provided this opportunity. He actually thinks God is giving him the opportunity to kill David, the one anointed by God to be the next king of Israel!

How did Saul slip, from the place where 1 Samuel 11:6 says, “…the Spirit of God came powerfully upon him…” (NIV) to the point where he is seeking to kill God’s appointed one?

One step at a time.

One step at a time, he stopped conversing with God. He stopped asking God for wisdom and to forgive him when he failed. In that place of lost intimacy, his heart grew cold and his feet walked away from God.

That day of my despair was the beginning of new lessons for me. I need to consult God, no matter how sure I feel about my decisions. I need to hear from the Holy Spirit, on every aspect of my life. For the moment I stop humbly asking my Creator for daily direction and to examine my heart, is the day I start a journey I don’t want to go on ever again.

Holy Spirit, empower me to humble myself, seek Your wisdom and submit to Your ways, not what appears to be right to me. Open my eyes to see when I am too dependent on my own strength and myself. I want to hear You, see You and walk with You every day, Lord.