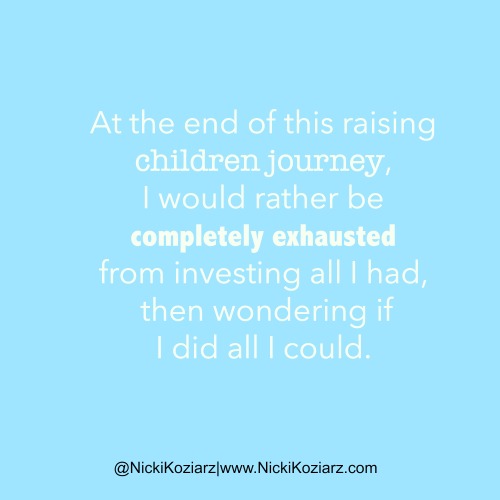 My friend and fellow Proverbs 31 Ministries‘ speaker, Nicki Koziarz, is my guest today. This is the encouragement and “permission” we all need.

A few weeks ago one of my daughter’s came to me in tears. She held up her phone, words escaped her. I took her phone and looked at something someone from her school had just posted on Instagram.

It was one of the most disturbing things I’ve ever seen.

It isn’t my story to tell, so that’s as far as I’ll go. But I don’t write this article today to simply share something disturbing that happened to one of my girls.

I write this article today as a plea to moms across the United States and the World.

It is time for us to become consistently involved in our kids social media.

The Momma Has The Right clause.

The Momma Has The Right clause states, at any moment, of any given day, for any reason, I may pick up their phones and look through them. That’s right: text messages, Instagram accounts, Tweets, emails … if its on there, I can look through it.

Well, while I hardly blink at fickle opinions of me, let me share with you why this is so incredibly important to me today.

I am a mom who loves other moms.

For most of my motherhood journey I have invested time, energy and efforts into mom-centered groups. My best friends are moms and I try to take time to get to know as many of my girl’s friend’s moms as I can.

But I’m seeing something so tragic happen within the motherhood sisterhood.

We are becoming parenting cowards.

Our kids are like little super geniuses because they have access to every piece of information they’d ever like to know. We are intimidated by how incredibly smart they are. And we just are not sure if we can stay a step ahead of them in this game of technology.

We can’t. Therefore, we don’t try.

So we say things like, “Oh, I just don’t have time for that.”

And no, we don’t have time for this!

We juggle complicated schedules that no mom in any other generation has had to deal with and we have bought into the lie that to have peace is to have quiet.

So, we toss those kids phones because it does just that … keeps things quiet.

But momma, the things happening on those phones are anything but quiet, sweet or simple.

Our kids are being rated for everything … the type of picture they take, their profiles, their clothes, and their hair. Mean girl tactics have escalated to new levels thanks to the instantaneousness of picture posting.

And our kid’s feeds are filled with desperate cries for attention and help.

We tell ourselves they need privacy and excuse ourselves out of the entire ordeal.

I don’t judge parents who don’t allow their kids to have access to social media … to each his own. But can I be honest? If I took my girls off social media now it would be the easy route for me.

Seriously. Having to listen for God’s discernment in knowing when to pick up their phones, watching their facial and body expressions change while they are scrolling and asking who is so-in-so … it can be exhausting.

But at the end of this raising children journey, I would rather be completely exhausted from investing all I had then wondering if I did all I could.

I’m not some foolish woman who believes there’s a perfect formula for raising our kids and protecting them from harm. But I believe in the power of having access to what my kids are doing and being exposed to in all things, including social media.

And I won’t close my eyes and pretend like it’s not happening. Because it is.

Mommas, pick up those kids phones. You have the right. Let’s stop being afraid to enter the hard, unknown places with our kids.

And when you do find something which might be going against the values you are instilling in your kids … talk about it.

Don’t yell. Don’t freak out. [Learn from my mistake.]

But I can promise there will be rolling eyes no matter what.

And maybe your kids won’t hardly listen to what you are concerned about. But the point is they will know you are present in this very un-present world of theirs. And even if they act like they don’t want you there, they need you there.