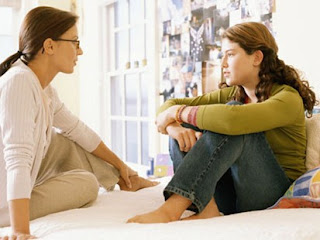 Last week on “In the Know” we began our discussion on “Building a Bridge to Your Child’s Heart”. If you haven’t already, send me a request for the entire article, free of charge, at Lynn@LynnCowell.

The second way we craft a bridge to our child’s heart is by being approachable. Our children are living in times that are both very fast pace and very difficult. Trying to figure out this world is hard enough for us adults, let alone an adolescent!

“If I could tell my mother and father something and they promised not to interrupt or pass judgment or yell, I would tell them all the times I’ve lied to them, the times I said I was going places that I never went, how I told them all about movies I’d never seen. I would tell them about my last relationship, the stuff that they don’t know. I would tell them about the time when we left the school dance and went to a secluded part in the woods and how he tried to make me do things I didn’t want to do. I’d them how hard it was when he was telling me what he wanted to do and how I said no and how he pressured me more than I could take. I’d tell them how I cried myself to sleep every night and how he told me I was nothing and didn’t deserve anything, how he told me that I was a hypocrite whenever I wouldn’t do sexual things, how I came so close to losing my virginity. I’d tell my mom that her stupid curfew kept me safe. I’d tell them how he left bruises on my arms and how when I asked him if he loved me, he would say, “I guess so, as much as anyone really can.” I would tell them I was sorry for breaking the rules, for bending them and wanting them to change. I would tell them that even though I thought the rules were stupid then, they kept me safe. I’d tell my parents that, because of them, I’m okay now.” – Amber, age 17 “Real Issues, Real Teens” by T. Suzanne Eller, pg. 96 – 97

When I first read this passage, I thought, “This poor girl! She needed her parent to understand.” That afternoon I read the passage to my son; a junior in high school. “I know exactly how she felt! There have been plenty of times when I have wanted to tell you things, but I knew you would freak out!”

I couldn’t believe this! I consider myself a pretty cool parent; did my son really feel that way? After much pleading, I convinced him that I would be calm. He finally shared with me some temptations and trials that he had experienced way back in middle school. I may have been going crazy on the inside, but outside I was cool! I decided I had to learn to be more approachable.

Some time later, my youngest daughter had her first boyfriend. When I began to ask some questions about the boy, she said, “Mom, I am not going to tell you anything because you always make a big deal about it!” Oh no! I thought. Not again! I didn’t want to make that same mistake. I promised I wouldn’t freak out no matter what she told me. Fortunately, the boyfriend thing didn’t last very long, but when they did in fact “break up”, my daughter forwarded me the text he sent. She let me in on how she felt; I was so happy to be trusted.

So often what our children need most from us is to just listen. Often I will ask my children, “Would you like me to just listen or do you want advice?”Often, especially if they are emotional, they want to talk; to be heard.

It can be very difficult to keep quiet at times like these yet Romans 12:15 tells us to:

Sometimes what they need from us is to be happy or sad with them. The time for advice giving is when the tears have stopped or the anger has subsided.

So just how do you become an approachable parent?

Respond instead of react.

Reacting is responding to a stimulus in a particular manner or to act in opposition, as against some force. Unfortunately the one we are against is the one that we are trying to have a relationship with! On the other hand to respond is to reply or answer in words or to react favorably.

Ron Blue, a financial expert, made this statement concerning our spending: “We should be thermostats instead of thermometers.” Thermometers tell the temperature; a thermostat sets it. By responding instead of reacting we set the temperature in our home. We practice self-control. Reacting causes our kids to lose heart, shuts them down, knocks out the foundation of our bridge. Responding opens hearts and builds our bridge.

Even if our teen is out of control, we don’t have to be.

Proverbs 15:1 “A gentle answer turns away wrath, but a harsh word stirs up anger. “

They need a safe place; let that safe place be us.

What situations do you find in your home that cause emotions to run high, but patience seems short?

Have you found this post to be helpful? Please forward it to a friend!

Lynn
Previous Post: « Never Gets Old
Next Post: Video Interview with 13 year old: Getting Teens to Open Up »