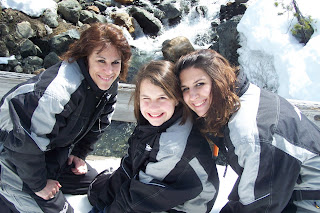 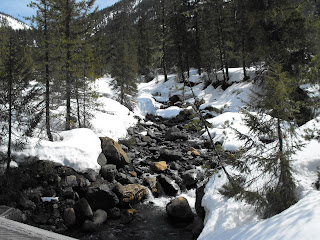 Last night my family just returned from our spring break vacation to Washington. We had asked around to get some advice on what to do on our trip and were told snowmobiling was a must. I had never been, but I am always up for a new outdoor adventure! It ended up being the highlight of our trip! On the internet, I had found an outfitter that supplied everything we needed: machines, helmets, gloves, snowsuits, books – even a backpack filled with drinks!

As we made our hour and a half drive from the city to the mountains, it was hard to imagine that there was really going to be enough snow to snowmobile. I began to wonder just what I had gotton my family into!

When we arrived, the owner promised that where he was leading us ther would be more snow than we could possibly want. What an understatement! They took us to a spot in the Wentachee National Forest that was still closed due to snow. All I can say is it had to be some of God’s best work! The beauty couldn’t be captured, even with a camera!

Originally, we were to be on our own, but we ended up having four guides: the owner, his four-year old son who drove his own full sized snowmobile (!!), 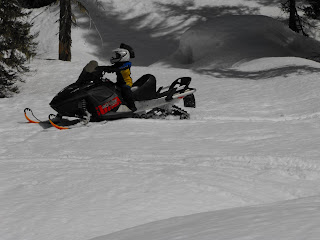 and two seventeen-year old guys. My son loved having these guys along! They continually left the path, encouraging Zach and Greg to join them. The guys had a lot of fun, but leaving the path also had its consequences! The first time, Greg over estimated the ability of the snowmachine to turn and hit a tree! Fortunately, he had on a helmet, but his back and hands took a beating. After this, our family stuck to the trail, but tour guides didn’t. Time and time again, they would get stuck. Greg and Zach would then have to get off of their machines and help dig these guys out. The guides didn’t care how often they were derailed or whose time and energy they took up. In II Timothy, Paul writes to Timothy, encouraging him to do just the opposite. “No one serving as a solider gets involved in civilian affairs – he wants to please his commanding officers.” II Timothy 2:4. He uses his own life as an example to Timothy, “I have fought the good fight, I have finished the race, I have kept the faith. Now there is in store for me the crown of righteousness which the Lord, the righteous judge will award to me on that day – and not only to me, but also to all who have longed for His appearing.” II Timothy 4:7 – 8

Like our guides, getting off the trail can be fun – for a time. But there is a price to pay when we do and it doesn’t just affect us, it affects those around us. The reason the owner and the guys went out with us that day was because they were trying to rescue a snowmobile. A guy had gotten off of the path and dropped his machine nine feet down into a creek bed. It probably was not going to be able to be retrieved.

Follow Paul’s advice; stay on the path! It is good and will result in many blessings. Keep your eyes on Jesus; He’ll show you the way!