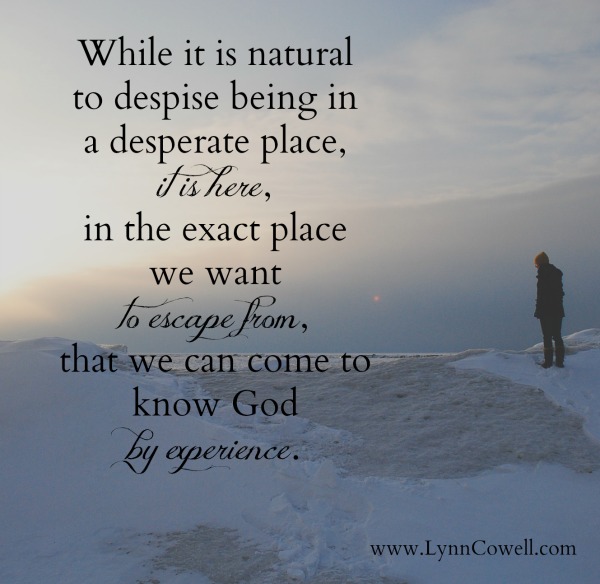 I’m what some might call a “half-full” type of gal. Looking on the positive side comes natural for me. Sometimes in life though, there is no bright side to look on.

This is exactly the place where the Israelites are at.

In Exodus 6:3, God is speaking to Moses: “I appeared to Abraham, to Isaac and to Jacob as God Almighty, but by my name the LORD I did not make myself known to them.” (NIV)

Dictionary.com tells me I could replace the word but in this verse for the word yet. God Himself appeared to these three patriarchs listed, yet there was a side of Himself He didn’t reveal to even them. He went on to tell Moses He was ready to show the Israelites this part of His character, by His name LORD, to make Himself known to them.

Typically, I don’t think of the word know as a really deep word. There are lots of people I know: my dry-cleaner, those I volunteer with at church, my neighbor whose dog runs away to my yard now and then. I’m thinking that’s not the type of knowing God is speaking of.

My Hebrew-Greek key word study Bible has a little number next to the words make myself known. When I follow the trail to find out the Hebrew meaning behind this phrase, it tells me the Hebrew word is yada: to know, recognize, understand. In fact, this word yada is the same word used in Genesis 4:1 “Now Adam knew Eve his wife, and she conceived and bore Cain, and said, “I have acquired a man from the Lord.” (NKJV) This word yada is deeply intimate and can only be understood by experience. The depth of yada seems lost in the simple English words make myself known.

God makes this promise, to make Himself known to His people, right smack in the middle of trouble; big trouble. Pharaoh had just amped up their work load as slaves; making the burden of making bricks for his projects even more difficult by taking away their materials. Beyond discouraged, they wondered where is He? Had He deserted them before He even began to help?

It is here, in the middle of their doubt and discouragement, that the LORD says He is going to make Himself known through experiencing Him.

There, under those horrendous conditions, where they are desperate and in a hard place far beyond their ability to dig themselves out on their own, He says You will know me.

With miracle upon miracle, God clearly makes Himself known like He never had before.

Because He does, they do.

They felt Him, as the sea was driven back with a strong east wind. (Exodus 14:21)

They saw Him as their enemy was drowned by the powerful crashing waves. (Exodus 14:27)

They knew Him as they experienced Him like they never had before. (Exodus 14:31)

While it is natural to despise being in a desperate place, it is here, in the exact place we want to escape from, that we come to know God by experience. To not only know of Him: who He is, His character, history and words; although those things are incredibly important, but to experience Him.

Our God wants us to experience yada; to know Him by experience.

Friend, do you need to experience God today? I do! While I am a firm believer that faith is not based on feelings, I also see here, in His word, that my God wants me to experience Him.

So today, I’m taking Him up on it. In desperation I am saying, “I want to know You, God. Make Yourself known to me.” Will you join me?