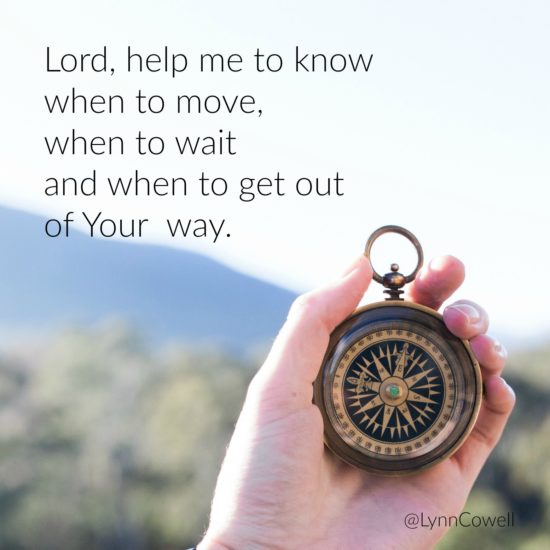 I don’t know about you, but there is this thing inside of me, that as soon as anything goes even slightly wrong, or even looks like it could go wrong, I am on it! I’ve got to fix it before my potential problem blows up. It doesn’t matter if the situation is small such as figuring out what’s for dinner or something so much bigger.

This pressure inside, this force that eventually just will not let me go, usually begins small. A thought births a concern. The concern swirls into a worry, the worry morphs into doubt and before I know it, my entire world has got to come to a halt. The problem has to be completely resolved.

Sometimes I believe that this “fix it fast” desire is from God. More often, though, I know it’s not. The rush to revise has its roots deep in fear. Anxiety growing into panic if I don’t do something.

This push, this drive springing from doubt, I have so wanted to be free from it. I wanted to be released from this perpetual rush to “come to the rescue”. This last year, so over its power over me, I decided to discover what it would look like to become confident and stop allowing doubt to push me around so much.

I turned to some of the most obscure women in the Bible: Shiphrah and Puah, Jochebed and Miriam and the Daughters of Zelophehad. Then I spent some time with Rahab.

Rahab, the woman in the Bible described with just one adjective: prostitute. She was the woman I wanted to emulate; because Rahab possessed what I desperately needed: the power to wait.

Absolutely and it is exactly what Rahab’s waiting did; it produced change.

Rahab had taken her faith steps. “But the woman had taken the two men and hidden them…” Joshua 2:4a (NIV) I’m guessing she didn’t even know that this movement was faith.

Rahab’s biggest act of trust, though, came after the spies left Jericho. They said they would return. When? Would it be a couple of days? A couple of weeks? Day after day after day she waited. Surely, the wondering of when they would come had to have gotten to her. They had left only her one clue: “…when the Lord gives us the land we will deal kindly and faithfully with you.” Joshua 2:14b

I can tell you the whispers I would have heard in my head, Did I do the right thing? Should I have asked more questions? What should I do now?

But I didn’t see doubt in Rahab. Instead I saw her faith working as each day she waited. The scarlet cord hung in the window, a symbol of her confidence in their God and the sign to the rescuers on where she would be found.

Hanging out with Rahab has been working the change in my life that I’ve been looking for. As I’m pouring God’s truth into my heart, my doubt is losing its grip and I am becoming more like her. A woman who isn’t driven to act and react, but instead I can wait. Wait to see what God will do and then what part He would have me to do.

Rahab did the faith thing right. She took a step and then, even as the problem came – the walls of her entire city falling down – she still waited, following the only instructions she had been given; to wait for the spies to rescue her.

It’s not been an easy or quick process, but I am seeing progress in my life. I’m allowing God’s peace to reach the swirling me. And here, as I seek His words for the wisdom I need, each day, He is leading me to know when to move, when to wait and when to get out of His way.