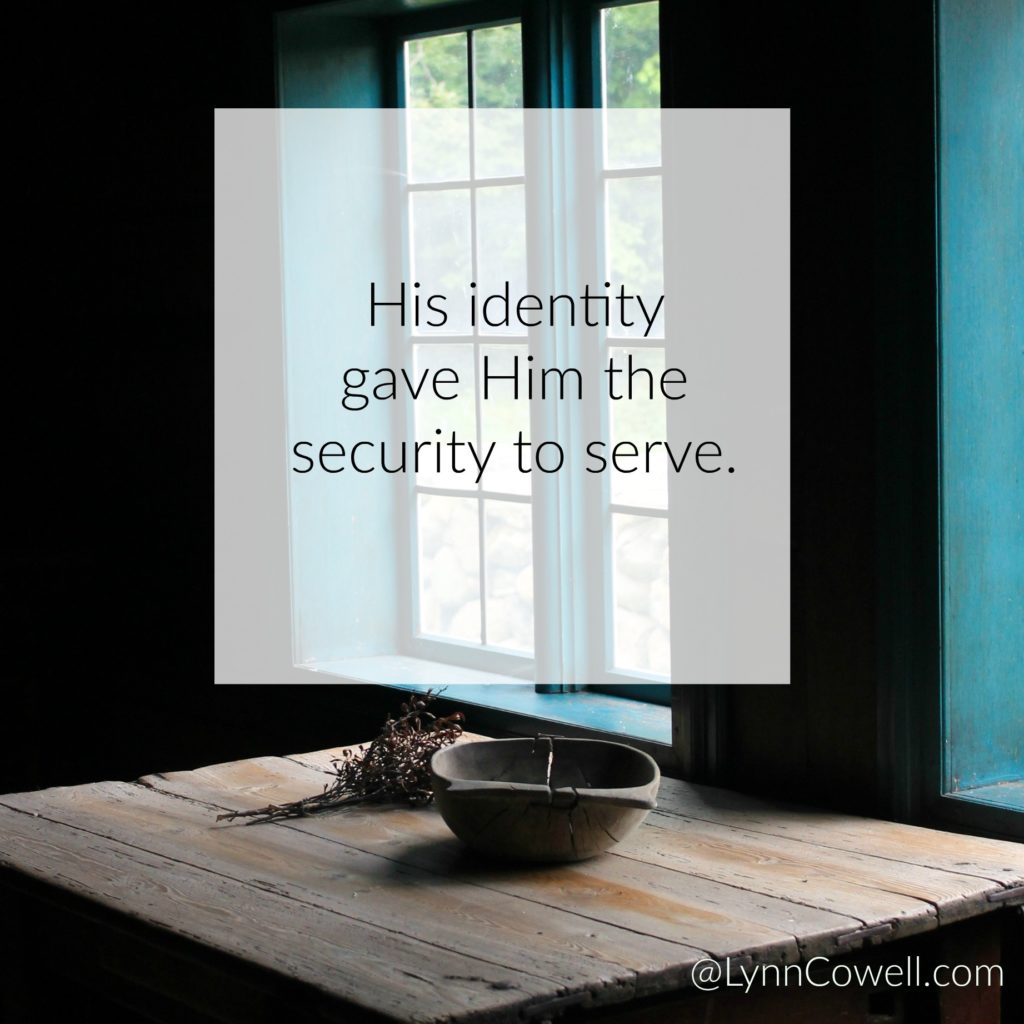 “Jesus, knowing that the Father had given all things into his hands, and that he had come from God and was going back to God, rose from supper. He laid aside his outer garments, and taking a towel, tied it around his waist. Then he poured water into a basin and began to wash the disciples’ feet and to wipe them with the towel that was wrapped around him.” John 13:3-5 (ESV)

Jesus, our crowning confidence example, knows who He is and whose He is.

He came from God; He was and is God’s son. He was going back to God; back to His father.

He also knew what would happen just moments away.

Here at the most vulnerable time in His human life, knowing a friend would betray Him, the Son of God, for the same price paid to purchase a common laborer in this time, serves.

He stands, takes off His robes, getting on His hands and knees to wash the feet of others. He served and washed the feet of His betrayer. (John 13:12)

As a human man, where did Jesus obtain the security to do the demeaning, the work of a servant?

His identity gave Him the security to serve.

Knowing who He was empowered the human-side of our Savior to humble Himself. He knew He was God’s own son; He was the Father’s beloved.

Even more than His model of what He did, for me, it is even more astounding what Jesus didn’t do. He didn’t defend Himself. His humanity could have been shouting in His mind, “You are the Son of God. Don’t do this! You don’t have to choose humiliation. You can choose honor!” Jesus didn’t seek honor or recognition. Instead, He sought to serve, to do the humble thing to be humbled instead of honored.

And so should I.

“When he had washed their feet and put on his outer garments and resumed his place, he said to them, “Do you understand what I have done to you? You call me Teacher and Lord, and you are right, for so I am.  If I then, your Lord and Teacher, have washed your feet, you also ought to wash one another’s feet. For I have given you an example, that you also should do just as I have done to you.” John 13:12 – 15 (ESV) And His command to us comes with a promise, “…blessed are you if you do them.” John 13:17

Jesus, You are my hero! You are my model. I want to be like You; serve and love as You do. Forgive me for wanting to be noticed, recognized, validated. May I instead, like you, grow into my identity as Your’s, giving me the confidence and security to serve as You served.