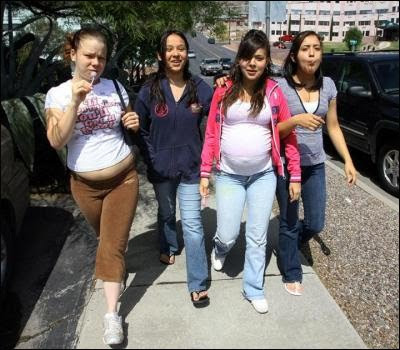 What does Gossip Girl, The Secret Life of the American Teenager,Glee and 90210 all have in common? If you said “teens” you were right. If you said “pregnant teens” you hit the nail on the head. The question is: Do these shows effect the opinions our girls have about becoming a mom while they are still growing up?

Teen girls say “yes”. In fact, 31% of teen girls say TV shows and movies make teenagers want to have a baby. (1) With statistics that high, I wonder just how accurately these shows depict the realities of becoming a mommy.

I remember very vividly when I became a mommy. Unlike the teens on these shows, I was 24. I had heard from many a mother, that once I had my own, I would immediately feel maternal instincts. Guess there was something wrong with me. As my son lay on my bed crying, I felt like there was something wrong with me. Why did I feel like an uneducated babysitter instead of a mommy? I felt so ill-prepared. I simply cannot imagine dealing with this at an even younger age.

TV doesn’t show stretch marks. TV doesn’t create the environment where diapers, baby food, and formula become the new shopping adventure. TV forgets the midnight feedings, the Friday nights at home and the loneliness that often comes on it’s heals. 20% of teen girls say TV shows and movies make motherhood seem normal. (1) It is anything but.

So, if these shows are glossing over the realities of motherhood, what type of lasting impression is this leaving? 55% of teen girls say TV shows and movies encourage teenagers to have sex. (1)

That’s where we have to step it up as parents and youth workers. We need to help to bring the truth of parenthood into the light. At this point, we’re not doing that. 48% of teen girls say they get their information on sex, pregnancy and parenting from TV shows. I know that is not what you want.

Make a point this week to sit down with your child if they watch these shows. Watch it with them; looking for conversation starters to bring up at a later time. (I’ve learned the hard way; if you bring it up right away, they feel like they are being stalked :). Look for times when you can share with them your early parenting stories; painting for them the realities of good and bad times. We can make a difference in our kids lives. We should be their source of information.

Lynn
Previous Post: « I Can’t Wait To Be With You
Next Post: Can You Give a Girl a Hand? »