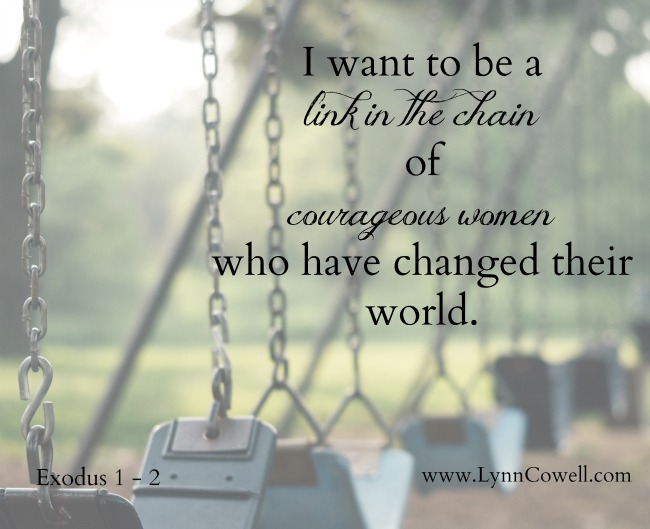 What word would you fill in the blank with?

When I see courage lived out, I want to be brave too!

Courage is what stirred in my heart as I read the legacy of the lives of Shiphrah, Puah, Jochebed and Miriam.

Who are these strange named women?

The story of this chain of courageous women is found in Exodus 1 and 2. Let’s follow the effect fearlessness made in history through the lives of these women.

Act of Courage 1: Shiphrah and Puah, midwives in Egypt, are commanded by Pharaoh to kill all males as soon as they are born. Bravely, Exodus 1:17 tells us, “The midwives, however, feared God and did not do what the king of Egypt had told them to do; they let the boys live.”

That’s a whole lot of social change being stirred up!

Act 2: Jochebed, Moses’ mother, upon his birth, courageously decides she will not obey Pharaoh either. Rather than kill her son, she hides him at home until she can do so no longer. When she can no longer keep his existence a secret, she puts this one she loves in a basket, hiding him in the Nile River. How brave! What faith!

Act 3: Miriam, Moses’ sister, stands by watching the basket boat. But she isn’t just observing. When Pharaoh’s daughter calls for the basket to be brought to her, this grit of a girl steps up and addresses the princess, giving royalty advice on how the child can be taken care of.

Do you see the chain effect that one woman’s courage had on another’s?

Shiphrah and Puah decided to go against Pharaoh together.

Jochebed, in the same steps of the midwives, chooses courage instead of compromise as well.

I have no doubt that Jochebed inspired her daughter to show her prowess to the princess.

I want to be a part of a chain effect of courageousness too!

As a young mother, my mom stepped out of her social norm, embraced Jesus as her savior and became a prayer warrior for her 8 children. Even though several were already adults when she came to know Christ, through her prayers and life testimony, all of them serve Him today.

I’m next in the chain of courage. Seeing my mother’s fearless faith gives me courage. Courage to believe for my children’s’ salvation and bravery to to make a difference in my world.

And I pray my children will follow the steps of Miriam, on the look out for where God can use them and when the time is right, boldly step up with the wisdom God gives them. In fact, they are already doing so.

Friend, where are you in the courage chain?

Is God calling you to be the first in your family to break out? To step up and bravely take steps to bring change to your family line? To redefine “normal” in your family’s legacy?

Maybe like me, you are blessed to have witnessed the courage of another and it has empowered you to be brave. We have to be careful not to grow comfortable 0r complacent when we’re in the middle of the chain, but instead be filled with the Holy Spirit to keep courage going.

Let’s be brave. Let’s display daring boldness and in turn, teach others.

Where do we start:

Kisses for Katie: A Story of Relentless Love and Redemption by Katie J. Davis

50 Women Every Christian Should Know: Learning from Heroines of the Faith

What Happens When Women Walk in Faith by Lysa TerKeurst

Let’s spur each other on today. What small steps of bravery have you already taken? Where are you going to be brave today? How can we teach the next generation to be brave?

I can’t wait to hear from you!